I waked up as Chi-young cried on the verge of tears.  Five a.m.  Due to snow-blinded from the last day's summit climbing I could not open my eyes.  My memory of the time reveals me only sounds and feelings.  Chang-ho and Il-jin, spent the night sharing the tent with me, left out to their tent.  Many thoughts struck my head.  Perhaps he might not die.  Yet If it was the case, Chi-young must have waked us up much urgently.  Tried to keep my ears open, and guess from this, that the only thing I could do.  The 'hyung'(brother in Korean)s frequently checked my condition and asked whether I would be able to climb down that day.  It had been very painful until last night, whereas this morning, although I could not open the eyes yet, pain was gone a lot.  However, to climb down blind from the camp seemed hopeless.

I hoped to climb down the next day and so I asked.  However, it was found again unworkable since the oxygen canisters left not enough and other members, Chang-ho in particular for his summit-without-oxygen, should have moved down as soon as possible.

Hours already passed managing the death.  Firstly Il-jin and Chi-young left; it was decided that next I would go down with Chang-ho.  Everything was decided and conducted in a very calm manner, from which nobody would be hinted a death of someone.  I was able to sense, however, that Seong-ho was died, or at least he was almost died.  I heard a rescue party being organized and climbing up to the last camp.  Chang-ho was indeed desperately exhausted: voiced completely hoarse without any bodily strength.  The Sherpas helped me walk short-roped.  Felt nervous, although Chang-ho would help me.  Fell down immediately after a few steps.  Could I climb down ... but I must.  Pasang held me in the front, and Chang-ho let me know where I should step next.  Between the two camps (Camp Four and Camp Three) were several points from which an incident of a fall would never stop until the 3000 ft below the Lhotse face.  I tried to make steps very carefully.  Then, for I could not see anything, strangely enough I became not scared.  As such was everything there then.  Calloused to someone's death as done to my own danger.  My own death might have been anything but sorrowful, as Seong-ho's death had never been sorrowful to us.  As taking a rest from tumbles, Chang-ho said, "Purna, you know Seong-ho hyung has been dead?  You should go back alive."

Now it was proved.  This was the first word that let me know his death.  Grimaced: my natural reaction, and silenced.  Next, one thought arrived: I should be more spirited to be a solace to him.  "Yes!"  Responded loudest as far as I could.

... Due to the unexpected situation [the broken bridge on the Icefall that halted their descending], staying at Camp One, talking to each other on everyday chores.  Laughed at things trivial and stupid jokes, as if nothing had happened.

... Nearing Base Camp, a few people walked out to us.  Almost tearing as I saw them; however, before them I did not want to weep.  Determined, I shared greetings.

"You made efforts," someone said.

This was enough to me. 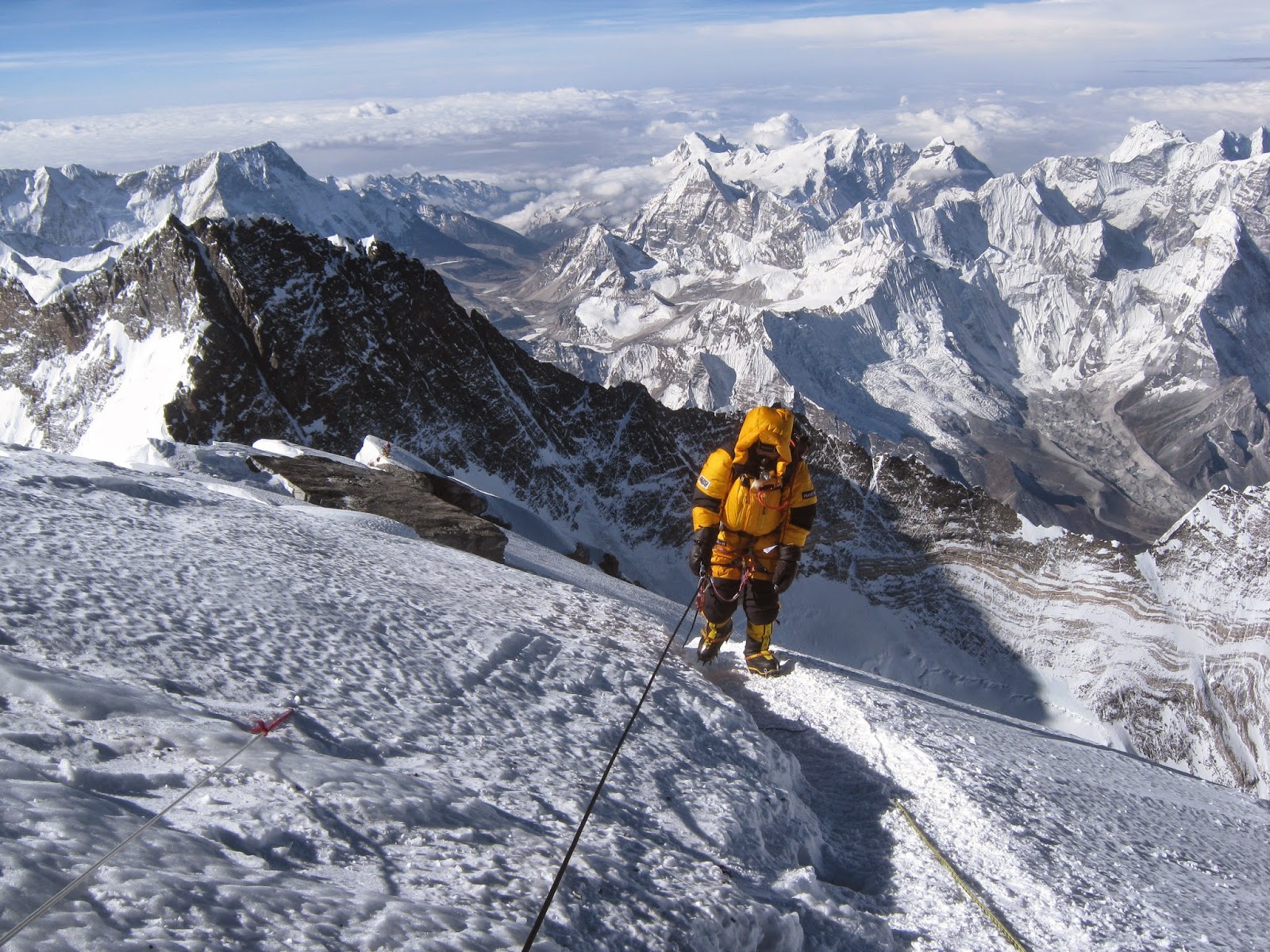 Purna walking toward the top of Mt. Everest (photo taken from the top) 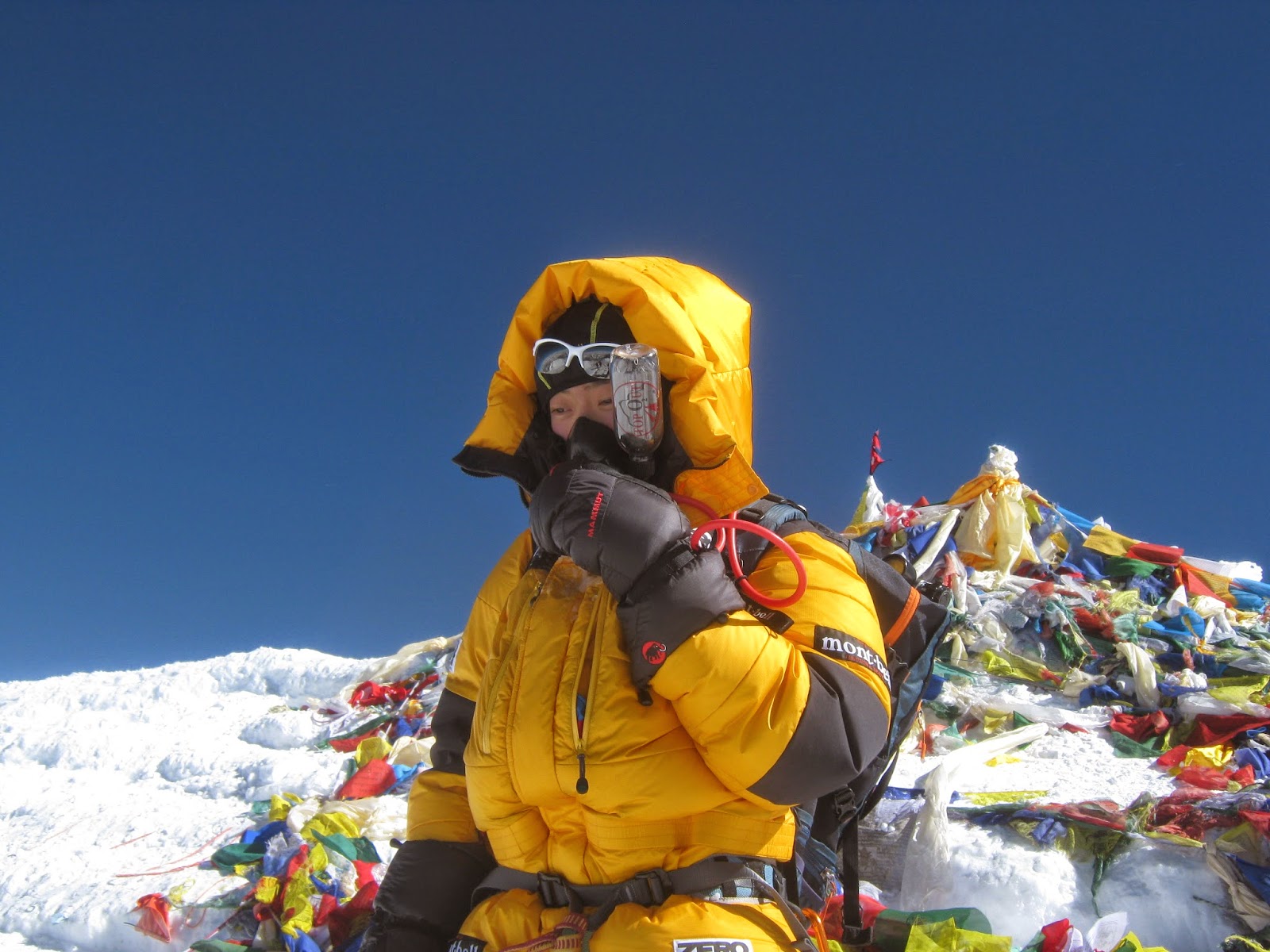 Purna on the top 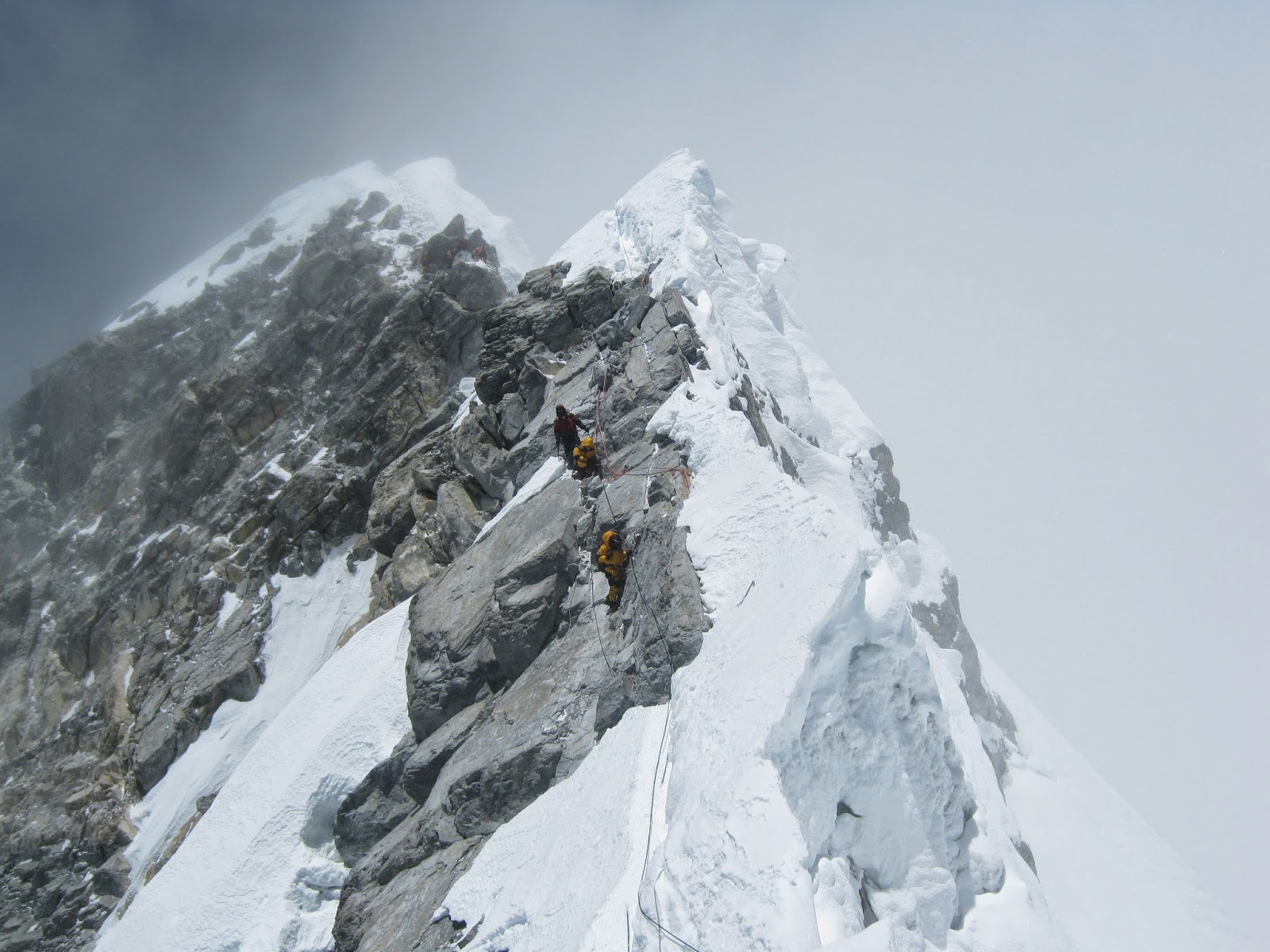 Purna (the lower) climbing down from the summit ridge. 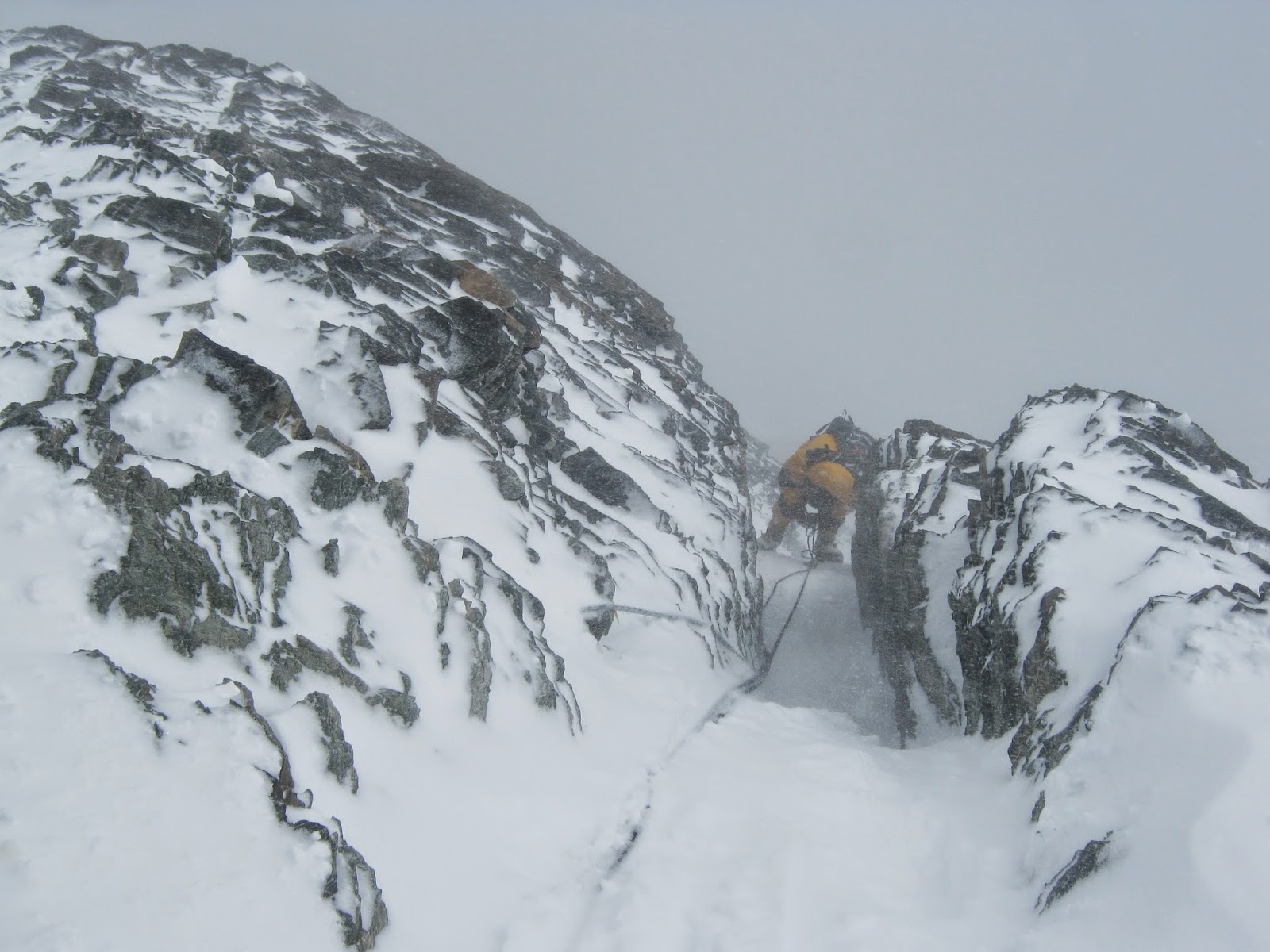 Purna climbing down from Balcony 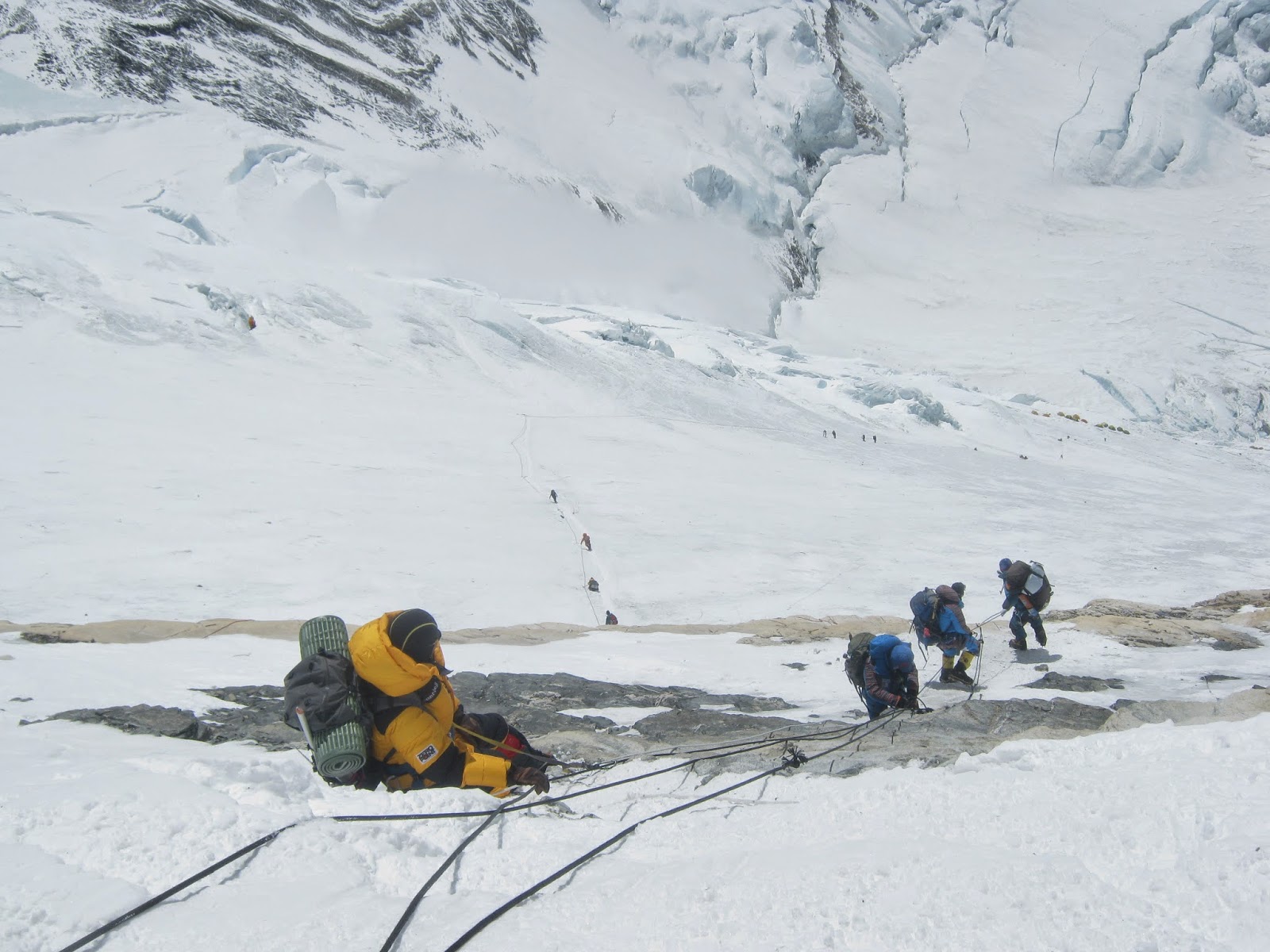 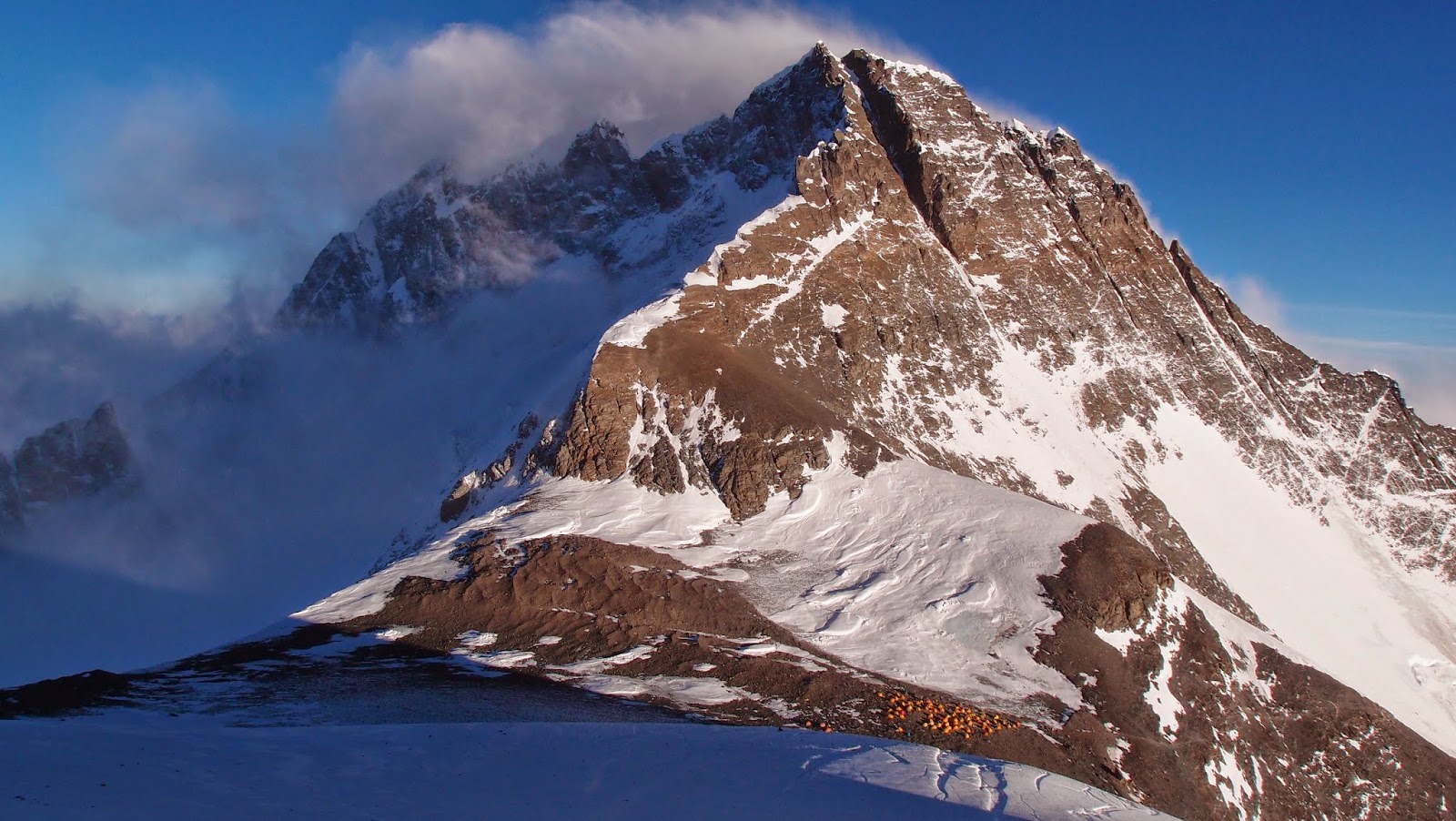 The South Col tents and Mt. Lhotse in the back (taken on c8300m of Everest) 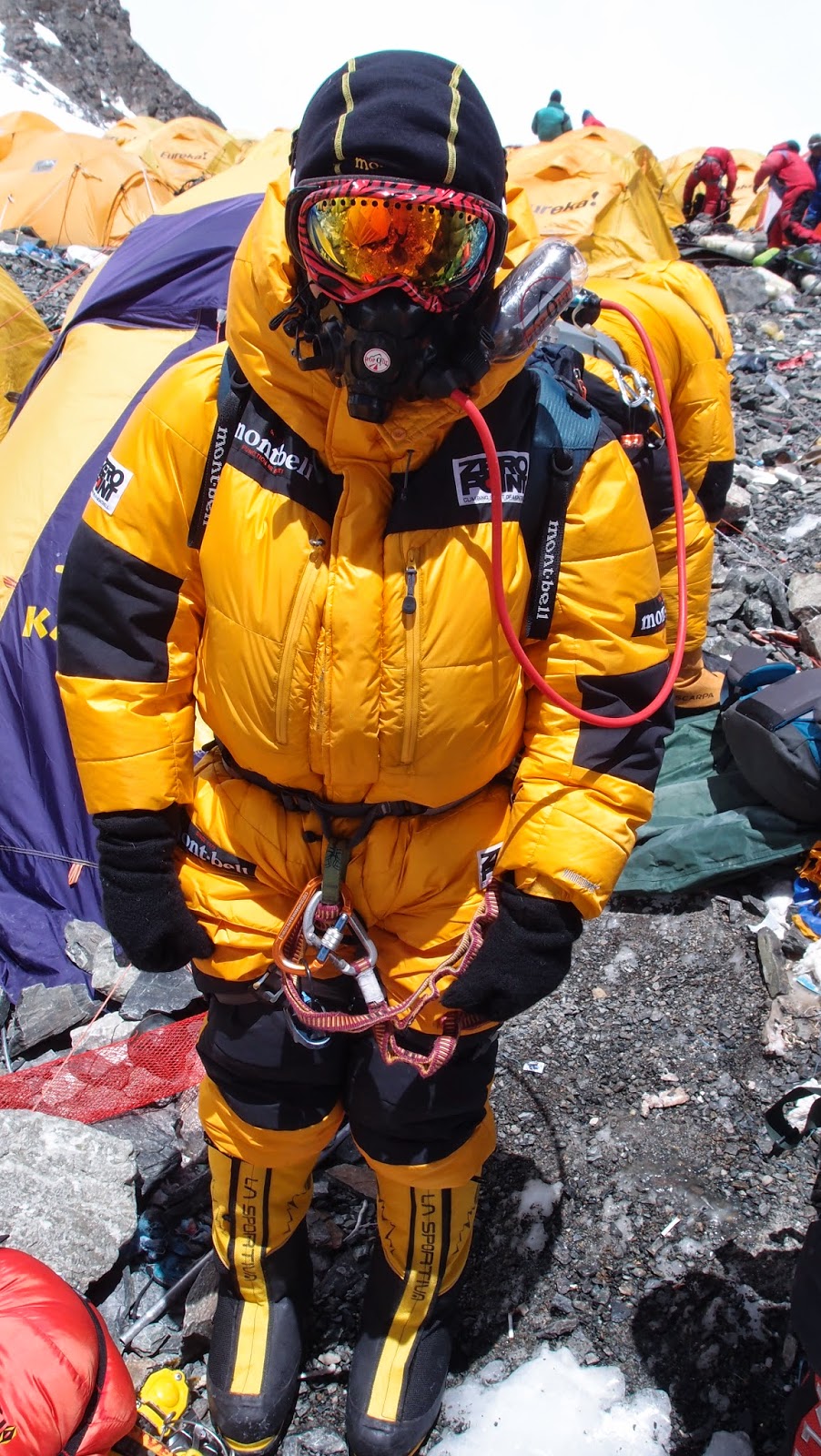 Now snow-blinded Purna ready to go down from Camp Four 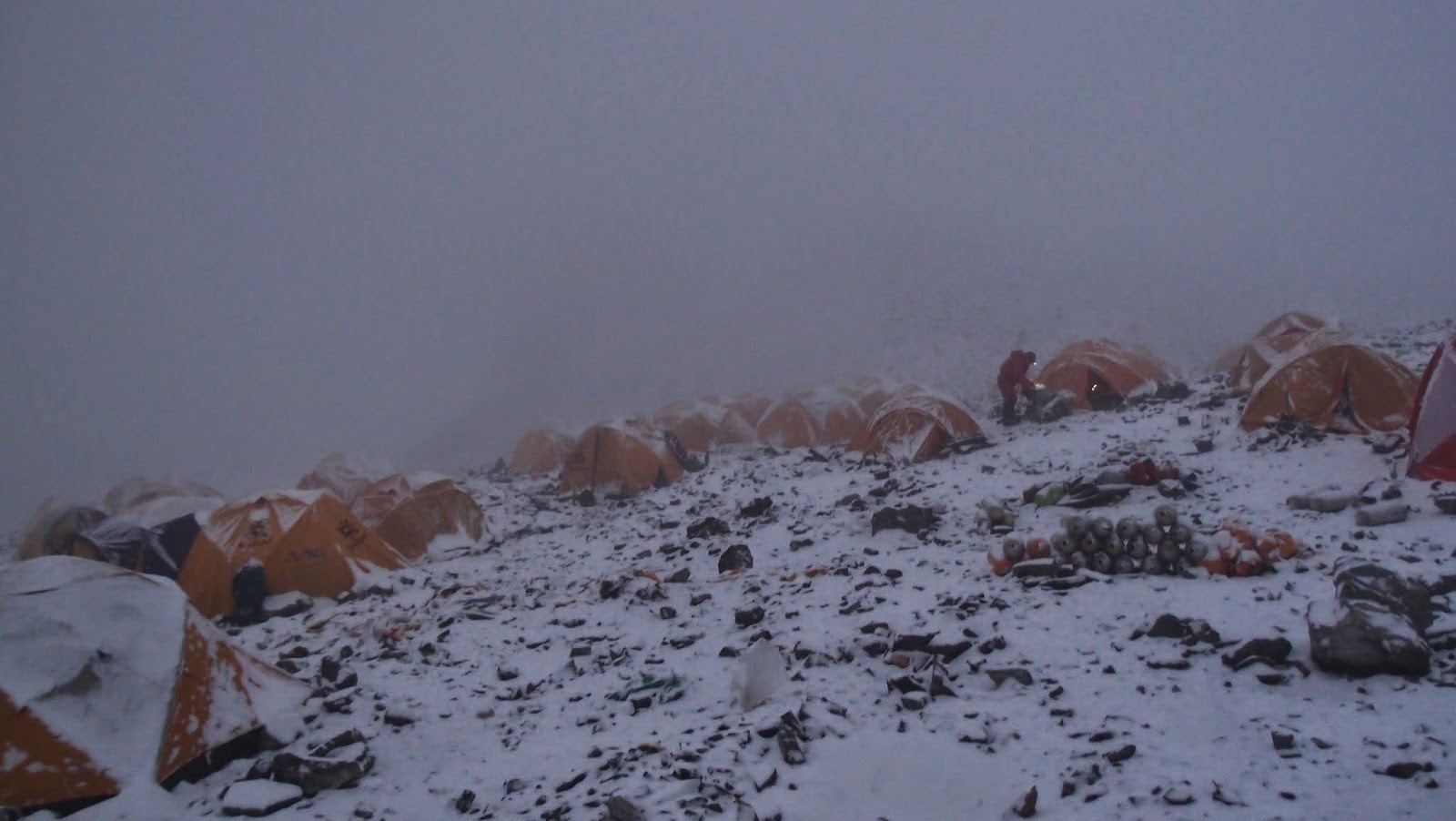