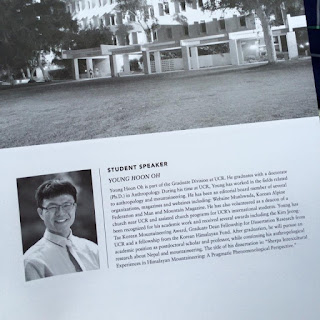 Four years ago, I stood atop of Mt. Everest, the highest mountain in the world. I climbed the mountain as part of my dissertation research studying about mountain climbing. It was one of the greatest moments in my life. This personal achievement as a researcher and a mountaineer could have been unthinkable if I was not a member of the UCR community. While other universities had no interest in my non-traditional research, only UCR, especially my advisor in anthropology, Dr. Sally Ness, agreed to support and constantly encouraged my intention of studying mountain climbing.

When I returned from my two-year field research in the Himalayas, I found she was seriously sick. She became almost blind and even couldn’t recognize my face. But she still wanted to help me as I set off the long process of writing a dissertation. She let me stop by her place every week to talk about my writing progress. What we shared during the uncertain days and months was hope for the future. Now I am more than happy as she is attending here and clearly seeing me.

It was not only my advisor who shared a community of hope, but also fellow graduate students, undergrad students, and staff members who were all equally significant in my six years at UCR. When I was taking courses, my cohort and I didn’t merely attend classes, but we also collaborated in a number of ways. We gathered at someone’s house, discussed difficult theories all night, and shared food, laughter, and everyday chit chat. As an international student, I couldn’t speak English well during the first couple of years, but they tried to understand what I struggled to say. Personal agonies became collective concerns.

I met one of my undergraduate students at K-Mart near UCR, where he was working as a part-time clerk. Being a student is tough for many people partly due to fast increasing tuition. Tensions arose between students and the administration over tuition hikes. While UCR wasn’t able to keep tuition as low as we would have liked, the administration kept the decision-making process as transparent as possible. Even when we don’t agree, we shared a common ground envisioning a better future for all of us and for the society at large. What we as a community have shown during the past several years is that hope, community, and unity are not something merely written on the wall, but the living principles with which we have lived here and will perform each of our lives in every corner of the world. I believe this is what we call tradition, the tradition of UCR which supported me as I climbed the top of the world. Without having a deeper sense of hope and trust, and so without deeply thinking about your own life and death, for example, you’ll never be able to dare to climb such a high and risky mountain. Being a member of the UCR community is therefore more than a sense of pride. It’s now part of my life, a second nature by which I and you, my fellow alumni, will go through all the uncertain moments that’ll follow in our lives.