There is a widespread rumor in the Western media and among pundits that states some Nepali expedition operators offer poorer services with less experienced Sherpa guides, by paying less salary to them, thus falling clients into more unsafe conditions (for example, see Mark Horrell's recent article).  This kind of claims is simply a speculation, with no down-to-earth factual basis but only unguided suspects and criticisms.

Instead, those western operators such as Adventure Consultants, Himex, IMG, Alpine Ascents, Altitude Junkies, etc. which once occupied a major portion of over-8,000-meter-peaks expedition industry, have recently experienced a shortage of experienced Sherpa guides.  They are known to charge clients between 40,000 and 65,000 USD for Everest.  This cost range is generally higher than those of Seven Summit Treks, 14 Peaks Club, Pioneer Adventure Treks, and others operated by Sherpa owners.  These Sherpa-owned operators charge between 30,000 and 40,000 USD. 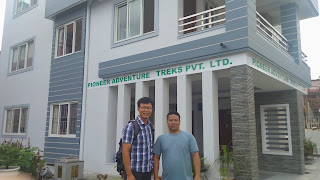 With Pasang Sherpas (right) in front of his office in Kathmandu

"Why on earth does the money have to travel to the Westerners?" Pasang reasoned.

The claim that those Nepali (Sherpa) owned organizers have less experienced Sherpas with minimum wage is also refuted.  Laughing off to this question of mine, Mingma Sherpa, the directing manager of Seven Summit Treks -- the expedition organizer that has sent the largest groups to Everest since 2013 till this day -- said: "We are paying between 1500 and 8000 USD to my climbing Sherpas on Everest, depending on their performance on the mountain.  If other agencies pay more money, then why have they, the most experienced among other Sherpas, worked with us?  How could we have held them to work with us?"
Posted by Young Hoon Oh at 6:35 PM