Group (or aggregation) necessitates multiplicity constituted by properties of each individual in the group, where the priority of "I" has no privilege.  On the other hand, mass (or crowd) designated, being an object of an observer, as opposite of "I" or "my" part, exists firstly with its category as the Other.

Although identical in terms of quantity, the concept of the latter -- mass -- is founded on assumed hierarchical, qualitative difference in properties of each individual. 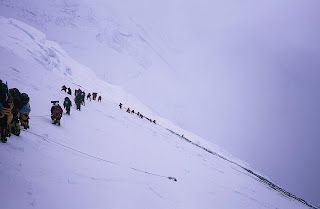