A Brief History of Korean Mountaineering

For thousands of years, people in the Korean peninsula have lived within mountainous landscape and flourished their culture along with the mountain. In the ancient thought, the mountain was more than an object of veneration but an essential part of their lives. People enjoyed their lives located near the mountain and stream, cultivated moral virtues in nature, and harmonized every aspect of their life in relation to the mountain.
In Confucian tradition, Korean scholars and government officials viewed reaching the top of high mountains including the highest Mt. Baekdu (2,744m), as an achievement to cultivate virtue and learn philosophical knowledge. In an intensifying national opposition in between China and Japan in the 16-17th century, mountain excursions were often sponsored by the government. Geographers published maps based on mountain systems. Two massive expeditions successfully reached the previously untrodden summit of the highest mountain respectively in 1740 and 1764.

In the late 1920s and under the Japanese colonial occupation, a number of Koreans began climbing rocks near Seoul, the capital of the country, with experienced Japanese climbers and British visitors. Because of the political tension, Korean and Japanese climbers somewhat competitively ascended difficult rock peaks and high mountains that offer quite severe climbing conditions.

In the social and political turmoil after the independence of 1945, Corea Alpine Club (CAC) was founded and inaugurated mountaineering events nationwide. Activities in this period were more or less focused on rebuilding national identity and basics of mountaineering. Since the Korean War (1950-1953), the history of mountaineering in South Korea may be said a constant development thus far. In the 1950-60s dozens of university alpine clubs were founded among high and middle class college students, followed by the foundation of Korean Alpine Federation in 1962. The economy had thrived drastically in 1960s, and in 1970s dozens of non-collegiate alpine clubs were founded. Mountaineering in the country was no more an exclusive avocation of a small circles of elite climbers but became a popular sport across the country.

In 1980s, more and more Korean mountaineers turned their eyes to higher mountains in other parts of the world. This was partly because traveling abroad was liberalized. The success of Korean expedition to Mt. Everest in 1977 was acclaimed as a national achievement, sanctioned mountain climbing as a national sport being worth to sponsor and feature on media. In 1980s, all women expeditions ventured high mountains and rock towers abroad. Sheer ice-falls in deeper gorges were firstly ascended. Rock-climbing competition was initiated in 1981, albeit with endless criticisms against its competitive nature.

Mountain tourism for Koreans has been always more than an athletic venture. In 1990s, one third of Korean citizens enjoyed hikes on the mountain at least once a month. More than sixty percent of the land of Korean peninsula is mountainous, yet it seems not sufficient for satiating all the tastes of the mountaineers. They have constructed more than fifty artificial ice-falls every winter for ice climbing, and about two hundred of sport climbing gyms have provided beginners with an appetite of climbing as well as athletes with a place for exercise today. Sport climbing became a popular sport in this period. Backed upon this popularization of mountain culture in a modern sense, more and more Korean mountaineers continued climbing to Himalayan mountains and other peaks abroad. This trend has continued to this day, as for example, currently six Koreans have completed climbing fourteen eight-thousand meter peaks. Climbing techniques and styles have also been variegated, such that Koreans climb ice-falls solo or the Himalayas in the minimalist alpine-style. In tandem with all this practical development, scholars, writers, critics, and government officials have extensively engaged in flourishing mountain culture of the country through magazines, monographs, TV programs, exhibitions and other cultural programs. (Published in the brochure of the 2015 UIAA General Assembly Seoul, Korea) 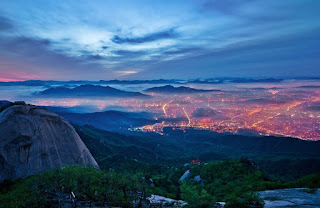 Insu-bong near Seoul. Because of its proximity, Insu-bong has played a major role in the recent development of modern climbing and mountaineering in Korea throughout the twentieth century.
Posted by Young Hoon Oh at 5:38 AM 1 comment: