A Rise of Extremism

Extremism is a doubtful concept.  What kind of standpoint does the extremity of so-called extremism arise out of?  Are we not encroaching into an extremism ourselves when we curse someone "extremist"?  This afternoon on campus, an interesting scene attracted many students near the Bell-tower, the symbolic central place.  Two elderly men were delivering public speech condemning "sins" of secularism such as homosexuality and abortion with signboards written, "Why You All Deserve Hell," "Islam = Terrorism, Rape" and so on.  A horde of students sitting in front of them often responded with mocking and laughing. 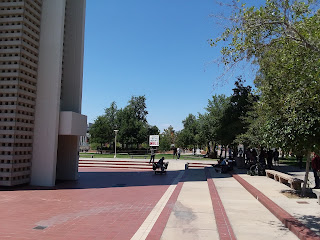 Religious extremists were they, liberal extremists the counterparts seemed to be.  The campus newspaper, run by a student editorial board, already opined at the current issue "Don't feed the trolls by the Bell Tower."  "Their words," notes the editorial, "carry very little weight for those who are not religious and do not believe in their brand of hell in the first place."  It seemed so.  The students responding them seemed more interested in how they could ridicule them by finding fault with the speech, sentence to sentence.

Rather, their speech and presence could, the newspaper continues, help the campus community learn the reality of our society where there are "lunatics ... who have extremely deluded convictions."  It was said "undoubtedly problematic" even though such a speech act is not illegal.

The Op-Ed piece is depicted with a cartoon where a few angry-faced people stand with pickets on a small island named "Island of Ignorance."  I suspect the editorial, not they, as well as most of my fellow liberals, standing on one.

The view states that the speakers as extremists incorrectly represent an "otherwise peaceful and tolerant group of people" who are lay Christians and practicing their religions with good sensitivity.  Really?  Is it that no public evangelism and being quiet outside churches means peace and tolerance?  The identification of hell and Islam--and, for that matter, any religion except Christianity--is by no means extrinsic to most church communities in the US.  Besides, all humans are essentially sinful according to the biblical point of view, so no one without Christian born-again will evade the final judgment and following hell.  The speech act itself is so distinctive in the sense that few Christians attempt evangelism in such a provocative way that may well drive the whole mood of the campus to liminality and punkyard.

Those who are concerned with the national history and ancestry of religiosity will find the recent feat of relativism in matters of sexuality and immigration hurting the core of their identity.  The extremity of religious extremism sprinkled against the church advocates shot out of the bystanders who make mockery and the editorial harshly sided with none but the campus evangelicals.

It is also frustrating to read from the paper that it is "improbable that [the speech acts] will actually influence any individual with a conscience and brain on this campus."  From an evangelical perspective, this extreme kind of conveying ideas is one of the most frequently used and highly effective strategies.  I even presume that the speech would potentially have created a place for conversation, understanding, and reconciliation with those who hold different perspectives.  A blunt obstinacy from the side of campus community unfortunately dazzled  off actions that might calm down lateral extremity of any kind.

A black, young dog held back before the makeshift wood bridge over a small-yet-violent stream that severs Yaphu and Walung.  The Sherpas wooed and threw stones, trying to drive him out from attempting to come cross, thinking it was too dangerous to walk on the wet slippery log for the dog and fall into the roaring water below.  The dog, however, was not just brave but agile enough to swiftly run over the bridge. 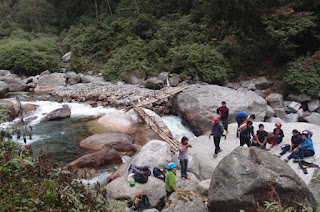 Walung Sherpas rest at a stream on the way to Dovtak.  A Dovtak dog ran across the flimsy wood bridge the next day.

It was the third and last day of our pilgrimage to the holy cave called "Khambalung" in Dovtak, a three-house Sherpa settlement in Yaphu area, Sankhuwasabha district, northeastern Nepal.  The black dog had been staying around the Dovtak lama's house where the Walung Sherpa visitors stayed during the trip.  The dog, however, seemed to have decided to follow us as we return; indeed, another dog slightly larger than him in the house was hostile to him all along, showing off an exclusive ownership of the dog's niche at the house.  "Is that migration for dogs is just to leave so instantly and with pure ease -- carrying no bags, wallets, food, toys, family, with no good-byes?" I wondered.  "Dogs are doing the same as the Sherpa men sometimes left home without saying anything to their family!" 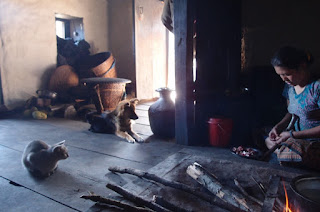 Dogs are rarely allowed to come in Sherpa houses.

The Dovtak dog (S. Dovtak-kki) indeed followed us until Walung and the very house I stayed.  Unfortunately, there was another female dog with a puppy.  The mom-dog barked harshly against the intruder, yet the visitor dog somehow managed to stay in the vicinity of the house, trying to keep close to the kitchen though behind the mom-dog straining to hold the ownership.  The Sherpa housewife, seeing the dog seemed so hungry after a long day's walk, threw some leftover food (Tormang we brought from the last night's ceremony) which he voraciously ate up.  He did not leave until I left to Kathmandu a few days later.

In Nepal, the way dogs and humans interact with each other in general is characterized by indifference.  Few dogs wave their tails to strangers (while puppies might -- a sign of nurture being over nature).  Sherpa boys often threw stones to wandering dogs who would get shocked and afraid.  Although dogs were found in the yards of many houses one on one, the strong tie between the house owners and the house dog as is common to many other countries seemed lacking in the Walung Sherpa village. 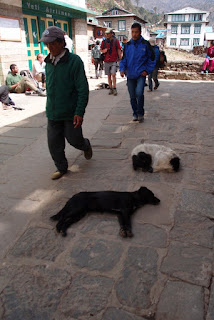 Dogs are taking a good nap in a busy street in Nepal.

I visited again the village several months later.  Wondering whereabouts of the Dovtak dog, I questioned to the house's Sherpa about him.  However, he said villagers killed the dog, motioning cutting the neck with a long knife.
"What?  Why?"
"Because he killed a few chickens."

The unfortunate dog apparently failed to replace the dog that had been previously occupying the household so as to assert his belonging to the household.  His death would have been avoided once the replacement was successful.  In the Sherpa village, the border between house dog and wild dog was not lasting long and often unclear. 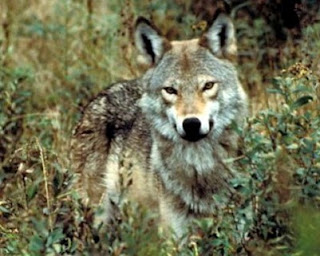 Dogs are among the first (or, perhaps the first) domesticated animals at least 10,000 years ago before the introduction of agriculture.  They had been a kind of wolf, staying around hunter-gatherers, scavenging carcasses and participating in human hunting.  Early humans caught some docile animals, while keeling fierce ones before they thrived, to breed and raise a specific kind of descendants leading to the evolution of the dog we see today.  Though the dogs I have seen in Nepal might not be genetically different from those I can joyfully mingle with in Korea or in America, the patterns of ecological adaptation Walung Sherpas have constituted locally and regionally have left the dogs less domesticated, not in the biological sense, emulating the individualistic feature of the highlander Sherpa society.  Nature of dogs in Walung nebulously overlaps nurture that is part of Sherpa culture.
Posted by Young Hoon Oh at 11:17 PM No comments: