The Korean Everest expedition, named "2012 Korean Peace Expedition," is composed of ten Koreans.  Most of them are in their twenties; only one among them -- myself -- has experienced the low level of oxygen in the air above 8,000 meters.

They initially have planned to climb the "Kangshung Face," the immense east face of the highest mountain.  The face is one of the hardest face in the world to climb on, as George Mallory who "discovered" the face firstly ever among the climb-minded people in 1921 mentioned like (I don't remember the exact words) 'only stupids may think to climb this.'  Now, there has been established two routes.

the immense Kangshung face of Mt. Everest (click to enlarge)

The Koreans had planned to climb through a new route, via east ridge which called "Fantasy ridge."  Three teams had tried so far the unclimbed route, returning their home in vain. 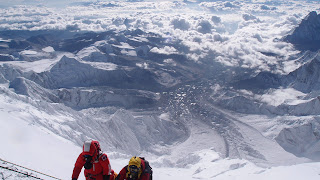 The "Fantasy Ridge" - behind the climbers - and the Kangshung glacier, seen from 8600 meters on the southeast ridge of Mt. Everest. (click to enlarge)

However, it was at a hotel in Kathmandu where they finally decided to climb the popular Southeast ridge.  The Chinese government had rejected all the applications of Visa into the territory of Xizang (Tibet) province, only for the mountaineering purpose.  People guessed, as a political vote of the region has been scheduled, the government has been afraid of any riot involving foreigners, especially of the "radical-minded" mountaineers.

"I once thought to forgive up the expedition," the leader said.  The climb, especially only through the scary ridge, was his dearest wish.

And, the name "Peace" of the expedition meant symbolically a reunion of North and South Korea by executing a joint expedition, as it had planned but failed to make.
Posted by Young Hoon Oh at 11:30 PM