A few days ago I have participated in the Annual Kathmandu Conference on Nepal and the Himalaya, Shanker Hotel, Kathmandu, July 25-27, where I presented my paper titled "Transregionalism, Hierarchy, and Belonging Dynamics in Himalayan Mountain Tourism."  The paper's abstract can be found here from the conference website.  The caveat of my paper is on three observations on the industry of Himalayan mountain tourism: 1) Kathmandu-centered transregionalism, 2) industrial hierarchy and Sherpa monopoly, and 3) Sherpa identity politics. 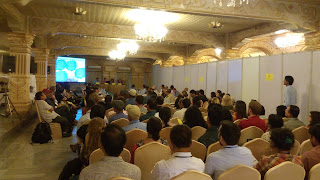 The discussant of the panel, Stefanie Lotter from SOAS University of London, commented on my paper with generous complements, which considered my positionality of being a non-Western, mountaineering, and multilingual anthropologist highly valuable regarding the fieldwork and overall perspective.  I admit that my peculiar position of mountaineer-cum-researcher has allowed me to be critical of the two popular views widespread not only among the Western public but also among the scholars.

The first is the perspective of Himalayan mountain tourism as a form of encounter between Nepal and the West or between the Sherpa and the Westerners, and this is simply false.  Foreign tourists cannot be generally called the "westerners."  In our conversation, Thaneswar Guragai, a Kathmandu-based researcher and compiler for 8000ers.com and Himalayan Database, agreed with my observation that non-western mountaineers are now at least about 40% of all non-Nepali climbers on Himalayan peaks.

The second false view on Himalayan mountain tourism is the assumption that social scientific study about mountaineering occupies a morally vantage point as opposed to mountaineering.  According to this view, mountaineering is something deemed to be criticized by social scientists.  But from my point of view, both mountaineering and anthropological research are touristic and can occur out of a romantic view of human. Mountaineering, furthermore, may strive for a "better" life of humanity and thus has a potential to provide something good to human.