Finally arrived at the basecamp of Mt. Everest at 12th April. 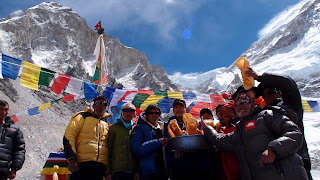 "Puja," the Sherpa rite for worshiping the mountain god in order to pray the climbers' safe during climbing on it.

"Clients," the name the Sherpa agency call their foreign mountaineers, would delightfully join the Sherpa ritual.  However, as Sherry Ortner accuses in her article (1999), the meanings of which embedded by Sherpa and clients respectively cannot help but to be different.  Simply, Sherpa would hope to be coming back from the mountain alive as they participating the job to make money.  Mountaineers, on the other hand, hope to be getting to the summit and come down alive as it is their dream. 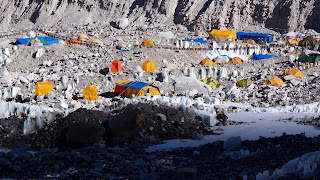 The basecamp of Mt. Everest resembles a huge international village, in which several hundreds of colorful tents filled with some six hundreds of mountaineers.  They are set up on the Khumbu glacier and the moraine, and so the configuration of the ground is changing everyday as it is melting with days go. 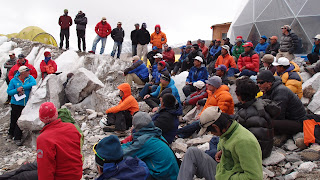 The leaders' meeting at the Himex' camp at the basecamp.  The famous New Zealander, the leader of the group, Russel Brice is in the blue jacket on the left of the photo.

One day there was the leaders' meeting at the Himex' camp, in order to discuss the ways climbers get to the top of the mountain and Mt. Lhotse.  Around forty representatives including cliental leaders and Sherpa leaders (called "Sirdar").  They have discussed about the issues of 1) route making up to the top, 2) double rope fixing on the occasional bottleneck areas, particularly right below the top of the South Summit (8750m) and the Hillary Step (8800m), 3) avoid to use such a poor "Korean rope" (referring the white PP rope which ordinarily used in Himalayan mountaineering as for fixing rope and which only produced in Korea), and rather use the thicker regular climbing rope 4) use beacon in order not to fall rescuers into another danger, and so on.

During the gathering I should have translated some key words into Korean for Mr. Park, the leader of another Korean expedition, for he did not understand spoken English.  Of course, I could not translate all the languages and all the significance of the words.  Unfortunately, there was no consideration for the people who would be deaf to the international language.  It may not be accidental that I have been hurt from some of the languages used in the meeting and the overall procedure, although, for example, the representative of the volunteers to operate the hospital at the basecamp area cheerfully admired the cooperative atmosphere among the mountaineers coming from all over the world. 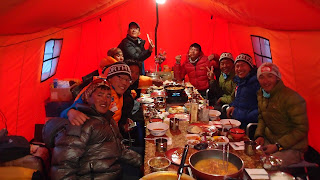 Party together with the members and local staffs.

In any way, I pursued a brotherhood relationship, more than friendship I would say, with the members and the local staffs including Sherpa climbers and the two cook.  Koreans, as Sherpas and Nepali would do, make relationship among them in accordance with their age.  We all are in a similar age group between 20-40.  I was the second, the cook Dhurba Rai the first, and many are around 28-30.  Mr. Yoo, 21, was called Kancha, The Nepali word referring the youngest. 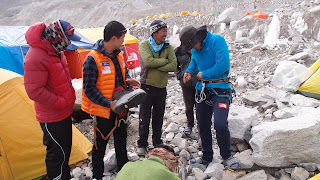 The final preparation was due at the initial few days of stay in the basecamp.  Checking the climbing gears, re-packing luggage to be transported to the upper camps, and, of course, acclimatizing their bodies to climb higher.  Mentally they are also to be prepared.