Climbing Mt. Everest would take a series of strategical progression of camps and mountaineers.  While there are more than fourteen routes leading to the top so far, the easiest route(s) is called "normal route," one in the southern (Nepal) side and the other in the northern (Tibetan) side.  The southern side was opened up firstly with the historic 1953 British expedition, in which Sir. Edmund Hillary got to the top with Tenzing Norgay Sherpa. 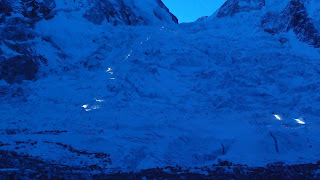 Climbers' lamps on the icefall section in the early morning.

The icefall section between B.C. and C1 is somewhat dangerous.  Climbers have to cross over shaking bridges over crevasses, below insecure ice towers, or with unknown possibility of avalanches.  During daytime when the sunlight lit on the ice more ice would be broken; thus climbers would start so early as to avoid casualty. 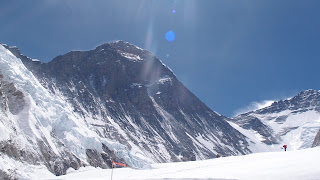 The immense southwest face of Mt. Everest seen from the Western Cwm.

Once being above the C1 you would find yourself struggling on the flat see of snow field--Western Cwm, G. L. Mallory called it in 1923 meaning valley in Wales term. 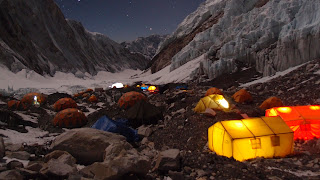 Camp 2 in 6,500m is ordinarily used as the Advanced Base Camp (ABC).  On the upper field of Western Cwm there is large moraine area in which more flat and more fixable tent platforms would be provided.  Also, the altitude is regarded as the highest on which people can recover physically their bodies by simply doing nothing--the higher if you go, you may not recover but be exhausted from the lower amount of oxygen in the air.  Thus, people pit up tents including kitchen and dining where one may take better relax. 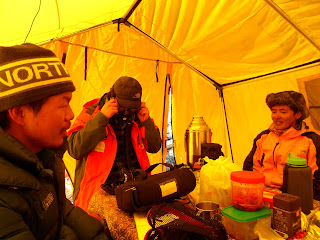 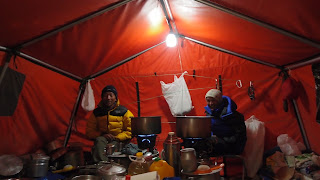 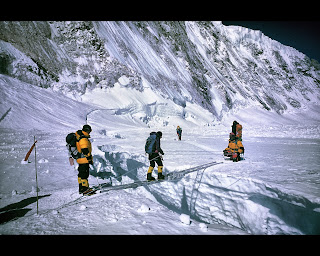 Crossing over a crevasse with an aluminium ladder on the Western Cwm.