What is that something called "fear"?

Before getting into more serious climbing activities up on the mountain, which is I would say to climb the steep Lhotse face, several fatal accidents already occurred.

The first one is the person, the member of an Indian team, who got cerebral edema while climbing on the icefall section, the elevation of which is "only" below 6,000m.  The Indian was rescued by other members and Sherpas to B.C., treated appropriately as to my standard (additional oxygen treatment and medicine), and carried to the better hospital in his own country.  Finally, however, we heard the sad news he was dead with a brain shock. 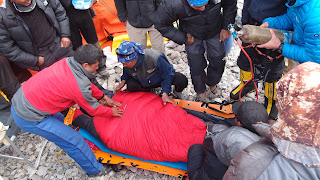 One day another news hit the B.C.  One competent Sherpa, coming back to B.C. after carrying luggage to C2, slipped down to a crevasse that led him to death.  A team of Sherpa took the body up from the horrible hole, and a helicopter carried the body down.  All the people crossing over the crevasse may notice the mark of the blood.  It is simply fearful, most people cannot help but shiver on the shaking feeble bridge.

Again, a huge avalanche clashed from around the top of Nuptse, one side of Western Cwm, overspread the narrow breadth of the snowfield.  Avalanche in such a high mountain means, not just "snow", but a crash, a collapse of a part of mountain, as the hard and immense ice towers falling from far above.  Hundreds of tents in C1 were blown off.  Several climbers, too.  Fortunately, nobody died but serious injuries.

I was at that time in C2, just hoping Jeong-Hwan, one member of my expedition, who left the camp one hour ago, was not in the scary cloud of the avalanche.  There was NOTHING that I and he could do.  Nobody was able to foresight such a disaster.

If there was some ways that I could choose in order to avoid the disaster, the feeling I would have had in the situation might be called "fear."  Indeed, there I did something: I turned my head to see the avalanche, and found myself OUT of the avalanche.  I was safe.  Thus, I could feel fear.

The first few days after arriving at the B.C. were the period to become friendly to the "sound of the hell," which is not the sound of avalanche, but which is, coming from below the tent in which you already be asleep into the comfort you feel the same in your own home.  Always glaciers are moving, speaking the sound of splitting.  You, demanding ease for your exhausted mind and body as well, cannot help but to listen the sound, through your humbly opened ears.  There is NO way you may not listen the sound.  You may tell about your feeling of hearing the sound to your friends, but you should listen anyway.  Therefore, you cannot feel fear to the sound.

If you find that your journey to the higher place is a kind of Russian Roulette, you do not have fear in front of the adverse conditions you should struggle through.  It is rather your destiny.  The way of life you already have no choice but to live.
Posted by Young Hoon Oh at 7:46 AM