From the C2, the more serious climbing is waiting for the mountaineers.  The sheer Lhotse Face, as high as more than 1,000m in its height, overwhelms the smallest human beings.

Throughout the April, due to the less amount of snowfall stones as well as icy face has been uncovered, which should have not been so.  It was a critical issue.  In every afternoon when the sun heated the face the ice particles and stones began to fall.  The miserable climbers had no choice but to hope those bullets would avert themselves.  But for some it was unfortunate.  Not a few had to be evacuated with bigger or smaller injuries in their arm, face, legs, only except the head that the shabby helmet luckily covered.  Danger did only come to us as if unseen shots. 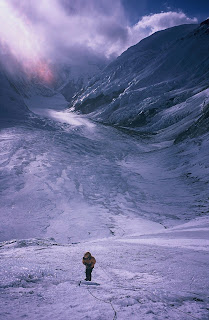 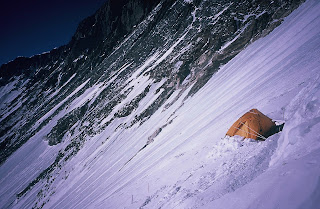 The Camp 3 on the midway of the Lhotse Face.  This tent was half-broken with an avalanche a few days later