It was 4:30PM when I arrived finally at the last camp on the "South Col" as high as 8,000m.  The summit plan should be reconsidered as soon as possible.  Previously the idea was that most of us would arrive the camp at around 2 or 3PM, which would give us enough time to enjoy short hours of rest with the supplemental oxygen, getting up 6PM and braking up from the camp to the top 8PM.  However, now we faced two problems: Too many people that likely block the way to the top, and not enough time to take a rest at the camp.

"Are you Okay, Jeonghwan?"
"Ya, of course."
"Then, let's start earlier than others. If we packed up among them, then we won't be able to move back and forth."

Thus, it was only 7:45PM that I and my "personal" Sherpa Ngaa Tenji began to move from the camp.  There were a couple of lights seen from the face upward of the big mountain which were probably of the season-first summitters'.  No earlier climbers on that day before us.  The air in the evening was cold.

In the film Apocalypse Now (1979) there was a focus on "horror."  If the particular bodily state dominates over the person, as the case of Vietnam War in the movie shows, all the human rules are to be reorganized in accordance to the "first" rule, which is horror in the movie.

It was deadly thirst that reorganized my all the journey to the top at that time.  The small water bottle soon went empty.  The two hours of rest at the final camp was too short to melt down ice and snow into water enough for the five people on the tent.  My bare consciousness had no choice but to imagine the scene of drinking water without restriction.  No concerns on climbing, no fear, no worry, and no delight being on the top.

The "Balcony" (8400m), the South Summit (8750m), and the famous Hillary-Step I have crossed over and climbed up without much consideration.  It was already almost the top when my watch showed 3AM.  Still dark around.

I needed a photo on the top.  It IS significant to share my getting on the top with others.  To see their pleasure, or rather their recognition of me would toggle the climbing into my experience, experience deemed to risk my life.

Therefore, we found a small cave right below the top in which two to three persons could take a rest, kicking into it, falling into a deep nap but short as we sat on one's own bag.  It was too cold, although the temperature was just around -30 centigrade, for we did not move one and half hour in the bench.  At 4:30AM we got up and headed to the top.

I had had driven throughout the vast desert in California in an evening some time ago alone.  Then, a fire was encaptured my sight.  The sky, and the world, was half red and half black.  The color of fire looked as if overwhelms the blacken world.

The sea of cloud was so vast to the whole east side of the mountain, the Tibetan side I firstly saw during the entire climbing.  And, the far end of the sea, not the small end, but the spouting out end, there was a presage of the sun, the symbol of energy, the maxim of life, the rule that governs the world.

Pictures were taken.  All the fingers freezing.  Only ten minutes on the top were not short amount of time since the strength of experience never be dominated by the duration.  Man overcomes time. 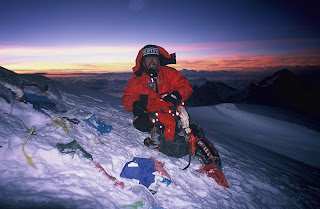 Young Hoon at the top of Mt. Everest at the dawn of May 19th. 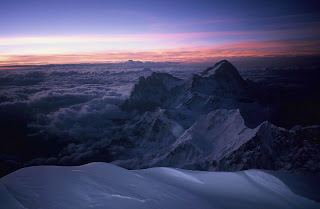 The fifth highest mountain Makalu (8463m) seen from the top of Mt. Everest 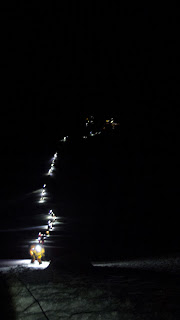