What is Decision to Live

Of course the reason of why we prepare for the future and try to avoid danger is to lessen the possibility of being fallen into more serious problems.  Nobody does not want to be death.  On the other hand, however, it is also true that nobody can choose one's own life lives.

The news hit me when I arrived back to C2 in the evening of the exhaustible day was a very sad one.  Two Koreans from the other Korean team were missed during their summit try.  The member of the team, Mr. Kim, had tried his best at the C2 in order to draw any other's help who were at C4.  However, all the Sherpa couldn't go up since they also needed to help their own clients.  What matters worse, the night began to blow the jet stream over 8,000m.

Five climbers including one of the two Koreans were dead that night.

I am alive now as writing this.  However, was I clever, strong enough to choose life, with a better decision?  No.  I did not know my decision was right when I had to decide.  Only what I did was TO ASSURE of me that mine would be right.  Nobody cannot foresight one's own future.  Mountaineering will be seen as the game against unknown; however, the rule of the game will also to be unknown. 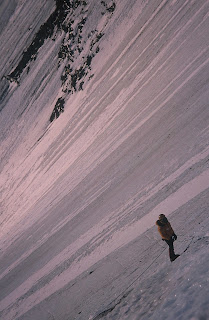