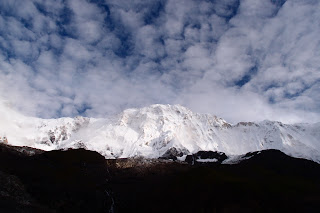 immense Annapurna South Face, seen from the base camp of the face

Right after coming back to Kathmandu, I could, almost by accident, join with a unusual Himalayan expedition.  It is a Korean one, purposing to search out the three dead bodies from the foot of the immense Annapurna South Face.  Three climbers were Park Youngseok, Shin Dongmin, and Kang Kiseok, leaded by Mr. Park, aiming to climb the wall through a new route in the "alpine-style" which means with no more than 2 ropes, no using supplemental oxygen bottles, no previous setting up high camps, no help from high porters like Sherpa, and so on, and is now commonly regarded a "better" style in high-altitude mountaineering, especially among the mainstream climbers.

I joined an Everest expedition in 2006 the leader of which was Mr. Park.  Mr. Kang was my old friend.  Most members of the current "rescue" expedition are also my good friends.  It is no wonder I could join with them although it was not planned, in particular I was regarded as skilled to build up a base camp.

There were two voices in their country: to retrieve their dead bodies and not to do so, leaving them onto the "heart" of the mountain.  "The family of the deceased" and the close friends like the members of the expedition seem to want to do so.  Other people who do not know the deceased ones personally seem to want not to do so.

Retrieving dead bodies from Himalayan mountains is not an extraordinary project for Korean people, as their mountaineering history shows several examples.  Sherpa mountaineers, in my interview with Sherpas, also regard the idea reasonable, while, as they concede, other national people would not do so.

Korean and Sherpa climbers coming back from ABC (Advanced Base Camp) to BC. 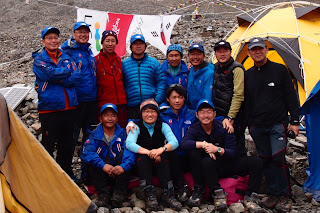 With all the members of the expedition at the basecamp 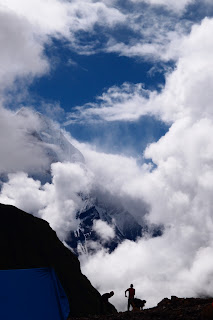