Kathmandu is a strange city.  Once everything therein was out of sight, as you did not concern at all; while again everything does not hold any meaning, all the voidness filled with the air.

I was trying to find out what were filled up with my mind.  Let's seat on an internet cafe, logging on email, Facebook... But failed.  Too much energy needed even to remember out ID and password.  In the website, another person with same face of mine looked at me.  Turned off the computer.  Not yet.  Now I needed some other.

There was only left emptiness.  Hornbein paralized himself: Dreams come true; however, nobody answers my question.  Why people lost their fingers and toes.  Why some do not return from the mountain.  Why we intended to climb on.  Why.  We did, but, there was (still) no answer.

I was not anymore "mountain" but also not yet "everyday."  I was "..." as Martin Heidegger impressively describes.  The life, the world in front of me did not hold any meaning.  There was only the flow of time, which is the life itself.  No necessity as well as no way to endow meaning onto the world and myself. 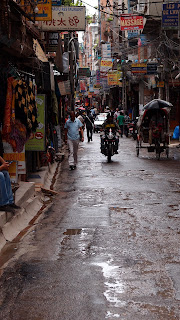 So far was the prologue of the start of my pages.  It may resemble what Heidegger progressed from the "former Heidegger" (ontology) to the "later Heidegger" (neo-ontology).  It is from humanist phenomenology to what recent philosophers call "post-phenomenology."  From Sartrean existentialism to Deleuze.  From the Cartesian to the Peircean Monism.