To live in a rural or mountainous area sometimes considers to be closer to "nature".  However, there is one considerable assumption.

"Yurukahssahmah" is a very active way of transforming the "nature" into what humankind would wish: "Yormahng" should be rooted out and dead.  Then, one may argue: the villagers would "love" the Gyarr, being more homogeneous with the "nature".

I may say that I have experienced three types of cats: one is in the US, cats of which tend to brag herself, as I have felt.  Another one is in Korea, the relation between the animal and their "owners" is rather an even-like exchange of affection (the cats tend to purr easier than those in the US).  The last one is here in Nepal.  I have never seen so far the dogs wagging their tails.  People and their livestock do not seem to exchange any affectionate behaviors.  Then, should I say, the relationship of cats and humans in the US can be more "lovely" than that of in Nepal? 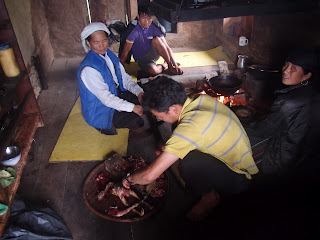 "Salia" is cutting a home-grown rooster, to serve me as I am leaving out the village 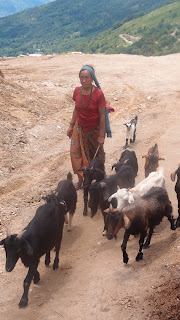 An old Gurungni carrying a flock of goats 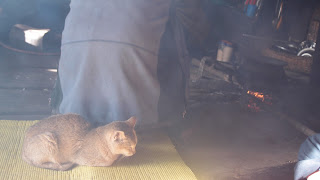 Sherpa cat, "Pissyung".  It looks not have learned any way of showing and exchanging affection to humans

The relation, or the definitions of human and nature has many times been discussed in the fields of social sciences.  As far as I know most of them have focused on the difficulty of the definitions and the activities or intentions of the defining tendency.  Here I am, however, approaching the topic in a different fashion: How we assume our emotions as their nature is something arouses FROM our body, our self, or any other our agency, which has always been regarded as our OWN.