It is well known that a foreigner should follow the local way of treating others, such as a locally particular way of dressing.  For example, taking an upper garment off and being half-naked may be regarded as rude or impertinent.  Nepal as a whole is one country the people of which may think the half-naked rude.

Then, what is "half-naked", and what is "clothes"?  What is the function of clothes which may distinct the naked skin from other person's eyes?  My question is, rather, what is the "eyes", "clothes", "nakedness", and so on?

Perhaps we should think in the same way in which we deal with "name" of things and "language" as a whole, in our conjecturations of the body, garments, or any other materials, but also anything we can think about. 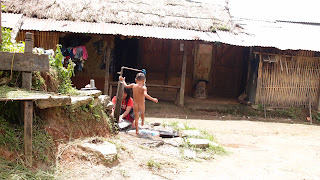