From the first glance, I would note of at least four themes on political ecology to the contemporary Walung area, Sankhuwasabha, northeastern Nepal.

1. Irony in education sponsorship
Children if they have enough education (i.e. speaking English fluently) they would, it is said, have gone out to other countries or at least Kathmandu.  The villages, then, would become empty.

2. Development as a local tourism sector
The people in the MSYC (Makalu Sherpa Youth Club, represented by Kama Chhring Sherpa) try to open a new trekking route to the Makalu Base Camp.  The example of Khumbu area (Mt. Everest area) will be a good case: As Mingma Sherpa criticizes, the wealthy locale do not anymore concern about the development of the local, poor people, while they send their children out to other developed countries to study further.

3. Interest on Environmental Problems
They have a local way of logging and clearing woods in order to make fields for cultivation.  It might be considered to be large area where the people cut off woods and make "Singngah".

4. Troubles between small villages.
The people in Nurbuchahur consider to build up a solid bridge bridge between their village and Pahl Kahrkah significant, to be settled foremost.  However, Kama Chhring Sherpa, the president of the MSYC and born and lived Angluwa, has not many interest on it.  Neither is the people of Nishar. 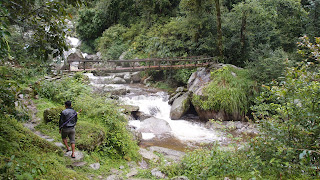