On May 18, beginning the day of climbing at the C3 to C4, I was but to be shocked with the crowd.  The endless chain of people were climbing up to the Lhotse Face in a line.  It looked like some three hundreds or more.  I was never heard about this before, as all of the others were.  The worst is that you have to wait even though you may walk faster. 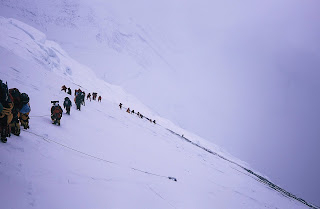 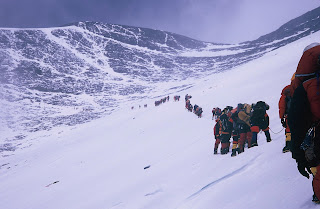 Simone Moro, the well-known Italian mountaineer, describes his being among the group of people as being in an "amusement park," and the people as begging a "jewel which they want to purchase and conquest."

Why were so many people packed there?  According to the Nepalese official record of the number of Mt. Everest climbers throughout the years, this year did not show the biggest number.  It is rather ordinary.

Tashi Sherpa, the basecamp manager of the "Seven Summit Treks" agency in Nepal, narrates differently.  He accuses the reason of "rush hour" on the face to the "Himex" team, the biggest commercial expedition of that time, managed by the New Zelander Russel Brice.  "The R.B. team (Himex) was initially to make the route to the top at least until the early May.  But, they didn't."  The New Zelander decided to forgive the year's summit climb, for he and others had concluded the condition of the mountain was worse to climb up.  They withdrew from the BC as late as May 8th without fixing the rope nor letting other teams know their decision.  Therefore, Tashi believes, the rest of the climbers could not help but to lose the better chances to try summit before the horrible day.

The photos of the crowd on the face, however, have covered the world news headlines.  And the typical way of depicting the "crowd" on the world highest mountain is not different from how Simone has cynically censured. Their purpose is only the conquering the top of the world; they have no serious consideration of the spirit of mountaineering; they are not "alpinist" but only "novice" who without the help of Sherpa would be fallen to death.  However, Simone, as well as me, was one of the crowd.

Thus, here are my questions: what is so-called "alpinism," and how does it differ from the naive philosophies of the crowd, if they are unlike from the genuine climbers?  I am not asking the should-be of the sport.  Nor, I am not querying the history of the sport.  My intention is a philosophical one: How one experience can be translated into diverse languages?