Only a few days of stay in the village were enough to let me face the difficulties in conducting fieldwork in such a rural area.  First of all, it is physiological problem.  The tough food was the one my body have troubled with.  Diarrhea did not stop due to continuous "Chang" (unstrained millet or corn wine) and "Ahrahk" (distilled liquor) which were served for me literally all the time.  Sometimes only a little smelling of food have me felt like vomiting.  Second is toileting.  It is hard to find an official toilet from each house.  Also, I do not have a knowledge of the after-measure of toilet without any toilet paper: Such a knowledge is one of the hardest things I could learn from "participating".  Third, especially during the summer season there are too many leeches that grapple with my bare feet.  If raining and if I should move to another house or village, only three minutes of walking would I find out tens of the horrible from inside of my sandals.  Blooding is quite frequent.  At least for me, to look at the insect and find my feet in red color is stressful. 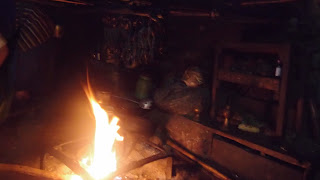 Smoking "Balba" (frog) at the brazier of Ngaa Dawa Sherpa's house.  Ngaa Dawa is a maternal uncle of Mingma Sherpa.  Eating the Balba food, as they served for me as it was regarded as a kind of valuable medicinal food, was, frankly, too hard for me. 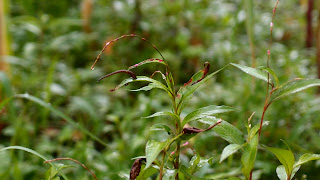 Leeches on a leaf

I cannot omit to tell another serious difficulty I have struggled with in conducting the fieldwork: To miss my home-people whom I love.  I was always thinking of those, especially my girlfriend.

I believe I never be able to live in the village just one single night if there is no such a lovely people.  It is not only very easy to tell them my troubles, but also they sincerely would suffer my struggles together.  My blood is not entirely of mine, when my "Gakka" (grandmother) feels the wounds and placates my heart.  I am just waiting for the "Mungsherr" (November) and "Pus" (December) when, they assert, the village life is much easier. 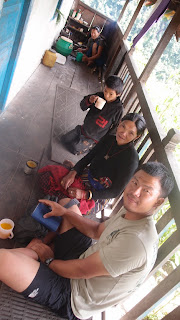 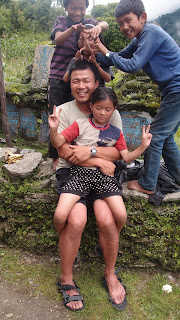 With Sherpa kids
Posted by Young Hoon Oh at 11:06 PM