Being Closer to Mountain

Trekking up to the base of the mountain is not just to acclimatize to the high-altitude place.  It is also to join with the life on the mountain.  Sherpa, the people reside in Khumbu area, are known as the host of Himalaya to the outer world, although they occupy only a bit of the entire mountainous peoples.

It seems natural to connect the Sherpa particular ethnic characters with their environments.  They would be regarded as more religious, more natural, closer to the land and mountains ("Himal" in Nepali) as well, and in particular the sacred animal yaks. 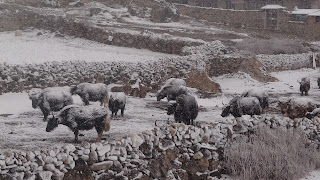 
One day I followed a yakman Nurbu.  He had been reigning seven yaks for carrying our loads to the basecamp.

His shouts to the animals were somethings that I've never heard before, and thought them like spells to control the sacred animals.

"Do they have names?"

"Ya, this one khare, that one langba."

"What do they mean?"

Then, they turned out, from the sacred, such ordinary cows that easily be seen in the field in my own country.