"Are you excited?" many people asked me.  I WAS excited, but not now, for the expedition.  When I was to decide to join the expedition far more than a year ago, I was excited, taking into consideration of every possible events that might occur to me by the climbing, being nervous of the situations in which life matters.  But not now.  I have made my body, my person, my life as of such a person who will climb the mountain, who will struggle not to suffer such severe hazards, who will take into consideration his life.  No excitation, no surprise to the future came to me.  All are expected, expected newness.  Already stepped in -- phrasing Deleuze, already climbed over to "plateau," living over, on which one never be able to feel how 'high' the place is. 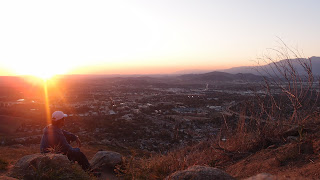 Running up the hill of Box Spring has been the best I found in Riverside in terms of not only for the purpose of training, but such a great view on top of it.  To look over the far sunset over the LA district was one of the best views among I've ever seen.  The view brings me to a larger, bigger world, by waking me up to the "spark" of the nature.  It is me who bring my body up on the hill; however, my agency can only work of leaving, entrusting my body to the forces of nature.  I realized the pleasure of "leaving off," without surveying its process.  The view has brought me to the larger world, the Himalayas, Mt. Everest.  The view was as such a bridge that connects me to a mountaineer. 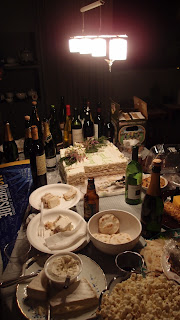 My advisor, Sally Ness, prepared for me a "farewell party."  Which I was really surprised, when I saw my name on the huge cake!  My surprise was doubled-sensed: not only it (the party) was hidden to me, but also

their particular expectation or imagination to my journey.  The question, "are you excited," was one that I'd heard so many times there.  Climbing such a highest mountain was something of individual, for whom the expectation was focused.  However, the countries where I will conduct my research developed very different ways of expecting futures.  Climbing is not something of individual as I've been experienced in America.  It may be something of more a group of humans, or more a "nature," or more a divine practice.  This constitutes my second surprise.  Only I am expecting my trip to Nepal as to be a series of such double-sensed surprises, which may be the maxim of ethnographic fieldwork.