It was 2006 when I was climbing Mt. Everest, tallest mountain in the world.  As a young mountaineer, it was really an awesome chance to climb such a prominent mountain. But I couldn't make it to the top, for a number of reasons.  The mechanical problem occurred to my oxygen regulator (i.e. frozen) as I have thought from since was not entirely responsible for my climbing back from about 1,000 ft. below the top.  The reasons are themselves a story: not just physical and material problems, but also conflicts, subtle relations among climbers as well as such a long dream of a Everest climber would tell more than the oxygen equipment.

More than anything else, if you succeed, you don't think many.  If you fail, you'd be forced to think, including what you've never asked before: Why you climb, or, why you live? 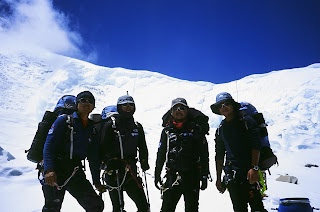 The four climbers at that time, now became two: Two have been killed on other mountains.  One in 2007, and the other in 2011.  Mr. Lee, next to me, does not climb any more.  I climb again.  Whether you actually climb or not and whether you are on mountain or not do not matter.  What matters is the fact that we are always forced to choose whether we climb or not.  Now I am not climbing, but I might climb tomorrow.  Someone says, "I'll never climb again."  But who knows.   See, his hands were already sweaty.