The American mountaineer, Barry Blanchard, said to his partner during the summit bid of Mt. Nanga Parbat (26,660ft., Pakistan): "I've been out of my body for the last half-hour, just watching myself climb and not really paying attention."  Apparently, he was hallucinated due to the extreme fatigue and the reduced partial pressure of oxygen in the air.  One of my key foci throughout my research is precisely the condition Barry narrated.  It might be observable the "gap" between what they experience and what they understand the experience.  The extreme condition of the sport would likely permit me to document the dramatic series of events. 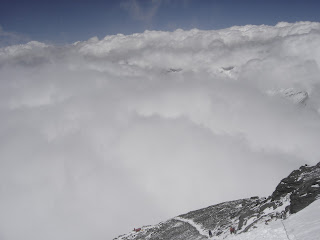 
What is the "gap"?  At least, it may be thinkable that there is such an un-reflexive experiential phase during climbing, as the exhausted mountaineer recollects.  His recollection, however, is not a description of the un-reflexive experience.  It is not a description, but a 'translation,' translated into his own language, according to his habitual form of thought.  Also, such an act of recollecting itself can be very culturally specific: while he and probably many other 'Western' mountaineers like to note the weird disunited conscious state during their climbing, others--including Sherpa mountaineers--tend not to do so.

Therefore, it is a legitimate hypothesis: whereas mountaineers participate in the pre-conscious, pre-symbolic, or pre-thought experience, they would understand, recollect, and symbolize the very experience in a variety of ways, differing from each persons.

The German term Dasein captures this ontological question.  Heidegger once said: "It is not "I" or "you".  It is someone who feel uncanny" if he/she recognizes him/herself is grounded on nothingness.  If one sees outside of her symbolic, conceptual, or rather cultural thinking--if possible--what can be said the nature of such a world?  What does it mean that to be "someone", not "I" or "you"?